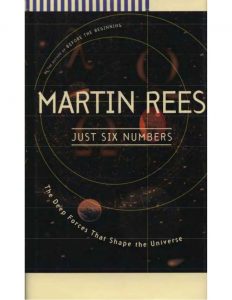 Sunday October 9th in the Parish Hall there was a discussion on Martin Rees book “Just Six Numbers.” The book, written by Britain’s “Astronomer Royal” is about the six numbers which govern the physical universe which allows not only our universe to exist in its current state, but also allows such a universe to support intelligent life. If any of these numbers were changed, a few of them even infinitesimally, our existence would be completely impossible.

Of course, that’s the physics of it… but also raises theological questions. Some see this as a proof of the existence of God, and others (myself included) see this as a place where one could catch a glimpse of a God who is in the details and in the margins of everything.

Watch the video summary of the six numbers: